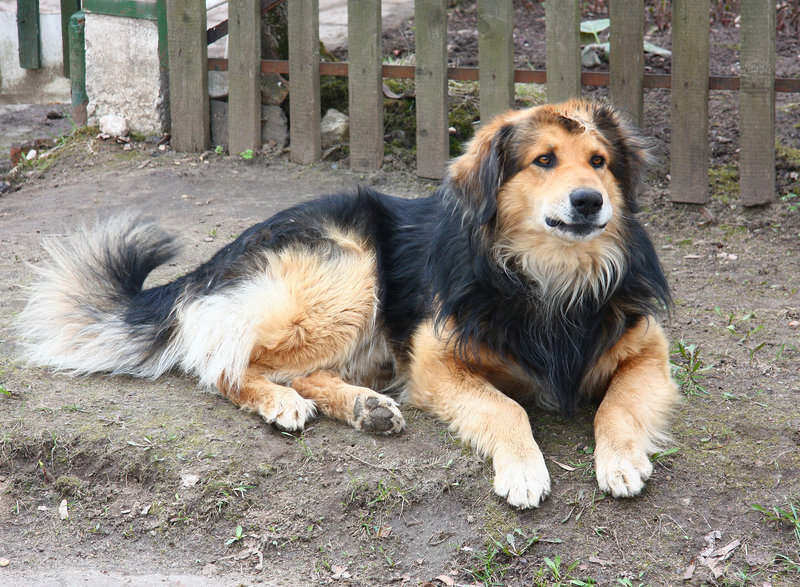 Although it may not seem like it, dogs suffer from many of the ailments that humans experience. From a simple cold to osteoarthritis, through hernias. As in humans, those suffered by dogs can have varying severity. In addition, hernias in dogs can be of four types: inguinal, diaphragm, umbilical and disc.

In any of the four cases, it is very important to diagnose them correctly as soon as possible. In this way, the appropriate treatment can be applied to the animal to relieve its discomfort. To do this, the main thing is to understand what a hernia is, what it implies and the main types of hernias in dogs.

The hernias of dogs, like those of humans, are lumps and bumps product of the exit of tissue from some organ of its usual position. They are quite painful, and are usually noticeable because the animal has a lump where it should not. A lump that is painful to the touch on many occasions.

As we have mentioned, the main types of hernias in dogs are four. Of these, the two most common are umbilical and disc herniations . The first usually occur when the animal is very young, shortly after birth. They usually start when the mother of a puppy incorrectly cuts the umbilical cord that joins him to him. When this happens they do not have a navel left as it happens with humans. But it is noticeable in an area that there has been a union with the mother.

In that area, if a hernia has formed, there will be a lump. Do not try to push it into the animal, because it can be painful. The solution to this hernia, and in general to all, is a surgical intervention to eliminate it.

The second most common type of hernia in dogs is herniated disc. Generally, it has its origin in a fall or a blow, which cause a rupture or inflammation of the intervertebral discs of the dog’s spine . However, in older dogs it may simply be due to the deterioration of the discs.

This hernia, in addition to being very painful, can generate mobility problems for dogs. These will be greater the more advanced and severe the hernia. In many cases, the solution will be surgery, but since it involves certain risks, it is the veterinarian who will have to assess if it is worth it. Meanwhile, you can relieve their pain with painkillers and anti-inflammatories. And in case the hernia is very serious and mobility is impaired, you can help him recover it with an adaptable dog wheelchair .

Inguinal and abdominal hernias in dogs

The other two types of hernia in dogs are less common. But equally painful for the animal. They are inguinal hernias and diaphragm hernias. The first are formed in the inguinal canal, a duct located between the muscles of the abdomen.

These types of hernias, which have the appearance of a mass of tissues, can become quite large. Therefore, as soon as they are detected, it is advisable to eliminate them by surgery, and this will probably be indicated by the veterinarian.

As for hernias of the diaphragm, they can cause serious health problems to the affected dog. This hernia, which is usually internal, often develops into the dog’s body. This is dangerous, as it can displace your organs. And it makes that many times, its symptoms are completely different from those of the rest of hernias.

Among them, the dog may have shortness of breath and irregularity in the heartbeat. Also vomiting or diarrhea if it affects the stomach or intestine. In addition, you may notice strange movements in the dog’s abdomen. This type of hernia is quite serious, and must be intervened as soon as possible to correct it. 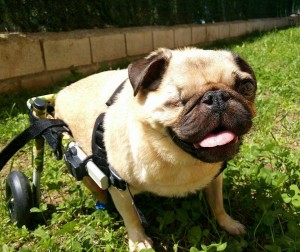 This is the story and story of Reyes Tejera, proud caretaker of Marcellin and client of Ortocanis, as we received it and in memory of this precious pug;

“Hello good afternoon. Here are a few lines of how we met you:

It was Halloween afternoon when I took Marcelino to the vet because his right eye suddenly looked very bad. Two months after struggling to save his eyeball and two operations later, it is decided to remove it with much disappointment for so much effort in vain; however, having only one eye was not the worst thing that 2014 was going to leave us: Marce had begun to limp. At first we blamed it on some blow or fall but when it seemed that it improved it began to limp more. A CT scan was the only solution. The result was two herniated discs and an adrenal cyst that prevented the sending of information from his brain to his left patuca. The options were various surgeries with very few guarantees or try it through physiotherapy. The joint decision was not to intervene and we quickly started with the physio sessions. At home we also worked daily but we needed something that could support him so he wouldn’t drag so much. The disability was already noticeable but we missed the walks outside our garden. 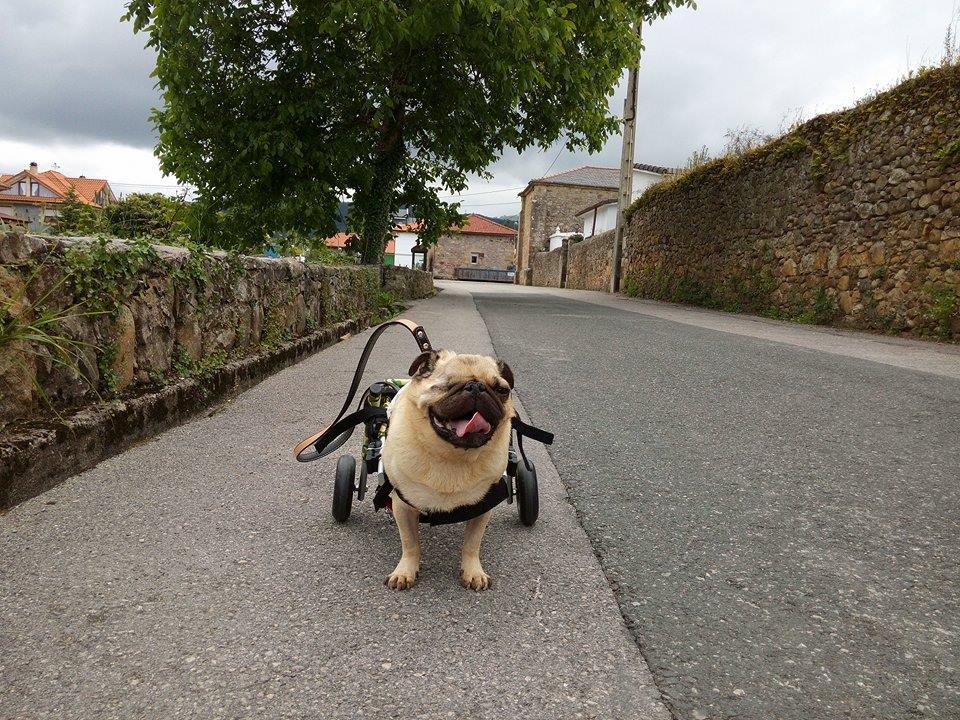 That’s how I came to you. “Wheelchair for dogs.” That’s what I put into Google. Your page appeared, I browsed the products and I sent you an email. Within minutes I received your call and two days later we had the child seat at home. I rode it as fast as I could because the excitement was huge. Marce looked at me as if she knew that those tubes contained something special. When I put it on, the first thing he did was throw a cart and looked at me again puzzled. It had just been two months since I turned 7 years old. It was April and spring was presented to us at the pace of a trot. In those principles the chair served to exercise the movement of his paws and also kept his body detached from the ground. Despite the exercises, the 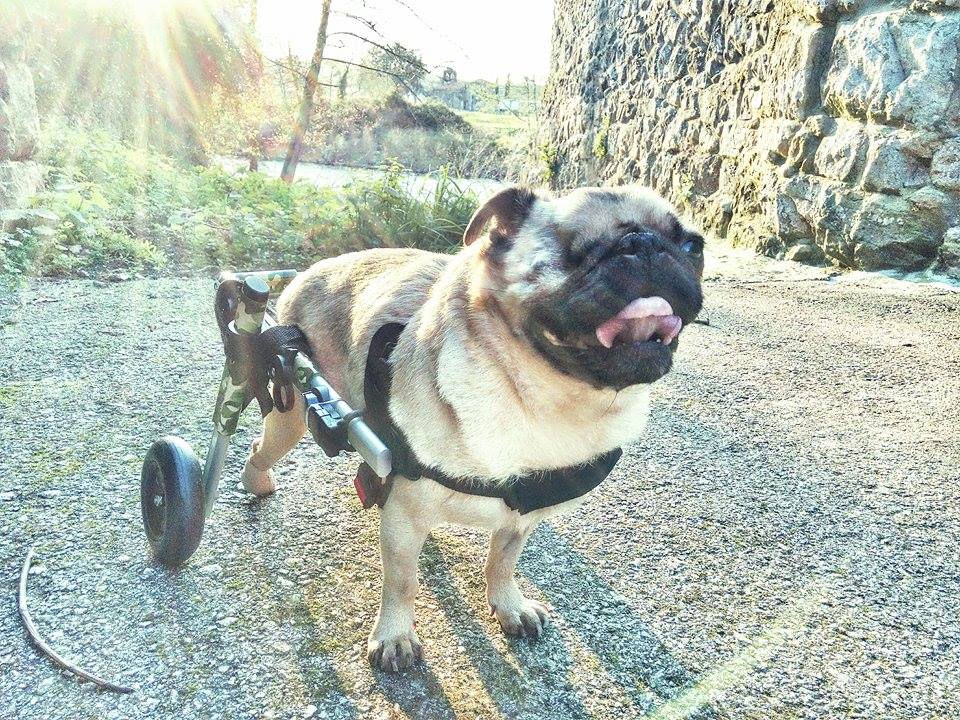 Physiotherapy and medication had lost almost all mobility but with your chair we could take walks, run and play. Marcellin learned to take curves, to go backwards, to climb some step… He felt like a dog again. Or rather ‘perropersona’ as we always defined him. Finally with the loss of control of sphincters derived from the lack of nerve impulses, came the urine infections practically chained and on July 2 of this year he began his journey to the rainbow. It was a long and painful process, especially hard in its end but I will always have seen him run around until the last day with his Orthocanis chair. This is broadly their story. I don’t mean you to publish it. Use the data you want. I hadn’t talked about all this again and that’s why it’s been so long. Thank you from Marce and myself.”
-From Ortocanis: Thanks to you Reyes for writing to us. 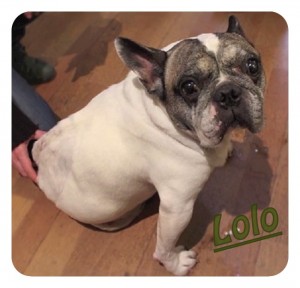 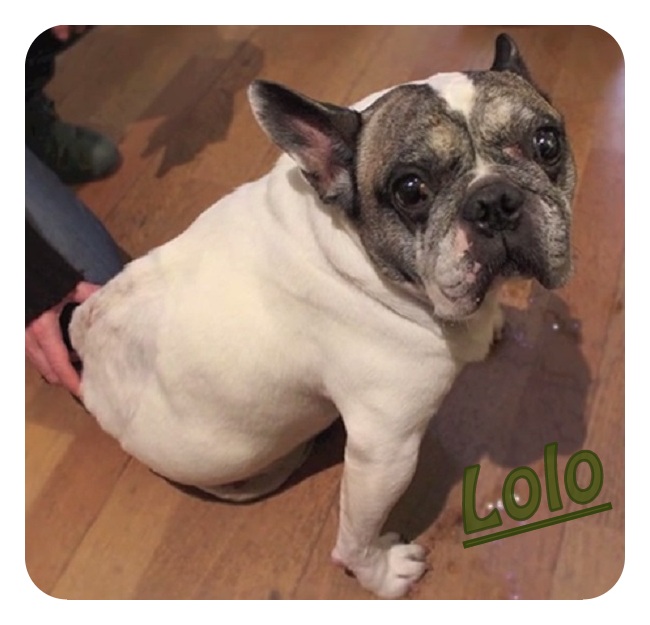 Lolo is a 7-year-old French Bulldog. From one day to the next, without his caregivers perceiving any overexertion, fall or trauma, Lolo stopped moving his legs from behind. They observed that he did not want to leave his basket.

The veterinarian did some tests where they verified that he had a herniated in an intervertebral disc. It put pressure on his spinal cord, damaging the nerves. As he still had tenderness in his hind limbs there were possibilities of regaining mobility after surgery.

The operation was carried out, but although the owners and Lolo put all their efforts into rehabilitation, it was not possible to recover mobility. Possibly the spinal cord was already badly damaged or there was another hernia somewhere else in the spine. 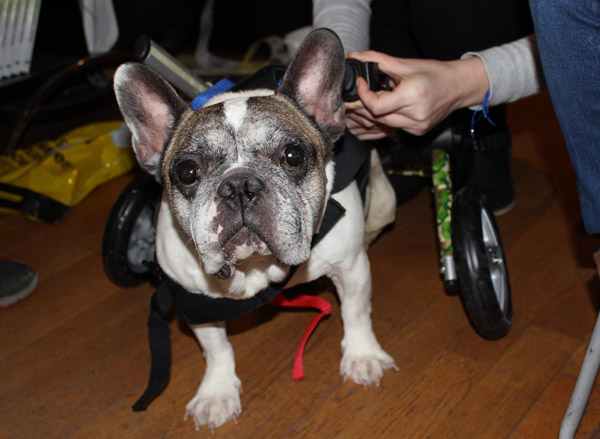 They didn’t give up. Lolo is a very vital dog, he really wants to move and be self-sufficient. That is why the owners opted for a wheelchair… and no one better than our warrior Lolo to release the new camouflage color model. The following video was filmed a few seconds after putting the chair for the first time…