Canicross is a sport involving a dog and a person, originating from mushing (dog sledding). The difference lies in that for Canicross, snow is not necessary and there is no sled, just the runner tied by a belt and rope to the dog, which is also hooked to the dog's harness.

One of the main advantages of Canicross is that you can practice at all levels. It can be done at an amateur level simply as a way of enjoying leisurely time, exercise and new experiences with your dog. Sign up for low-level competitions to have fun with other practitioners or sign up for leagues to compete on a more "serious" level.

One of the main features of Canicross is that both racing and training can be practiced in very beautiful settings, surrounded by nature and away from the loud crowds of the cities. Wherever practiced, whether in the city or by the seaside, it remains another one of the worlds' greatest pleasures! 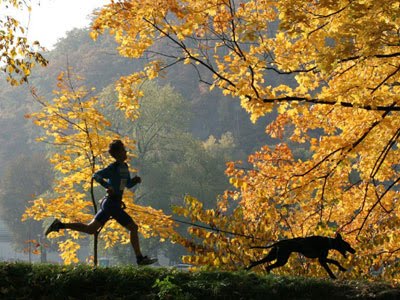 The great news is that Canicross is an extremely inexpensive sport: all that is needed are running shoes, a harness and a rope. The amount spent on material is minimal and furthermore, the rope and belt for the runner as well as the dog's harness can last several seasons.

The rules are very simple and can be summarized by saying that dangerous dogs must not participate. We refer to the individual dog, as the breed is of no importance, since all without exception are admitted as long as they are in good health, have passed rigorous veterinary tests, have up to date vaccinations and an implanted microchip.

If a dog starts to cause conflict, for example with another breed, but is not necessarily dangerous, the competitor can move to the back of the race or a muzzle can be used.

The runner should always be behind the dog or, at most, next to the dog. If the runner beats the dog and pulls it, he/she may be disqualified. You can only pull the dog when changing directions or in cases where the animal has become distracted. Furthermore, no physical or verbal assault is permitted towards your own or other dogs.

There are races throughout Spain, Catalonia being one of the most traditional locations. The Catalan Canicross League is already going on its 8th edition having also developed its own versions on land or snow (where runners run on snow), this league is convened by four federations:

You must be a member of one of these federations to participate in the league.

You can also find information in the Canicross Section of the Spanish Mushers' Association.

Canicross is predominantly a winter sport, especially in our country (Spain) as dogs start to suffer more than they should when competing in temperatures above 15 degrees celsius. In the Catalan league, the race may be suspended or the length shortened when temperatures reach above 20°C, however it is not suspended in the case of rain.

In short, you are running with your dog, doing physical activity, helping both the dog and yourself to stay in good shape, in the middle of nature, - it is an absolute thrill!