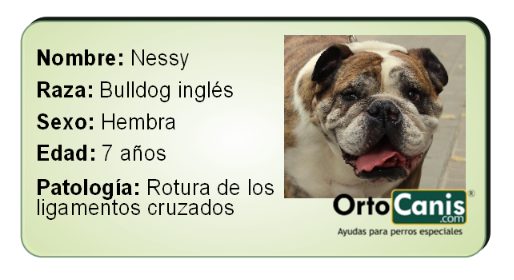 Nessy is one of those cases in which, although important, the orthopedic condition is overshadowed by other factors. This strong fighter used to be a female used for breeding. She dedicated five years of her life to gestating and giving birth to English Bulldogs in Andalucía.

Her current owners (a young couple) learned about her through the Internet. Looking through a forum dedicated to Bulldogs (they already had one at home), someone wrote that they needed a foster home, because “she was no longer productive enough as a breeding female” and they were going to take her to the pound. The couple didn’t think twice about it and decided to adopt her.

She adapted very well to the new family (it was definitely the first time she ever had one…), but after a week she fell ill: fatigue, vomiting, lack of appetite… They brought her to the vet. The diagnosis was clear: pyometra. Pyometra literally means pus in the uterus and it is an irreversible defect of the womb due to high repeated hormonal stimulation. This condition is common in females over 10 years old that were never spayed, however Nessy was only 5. 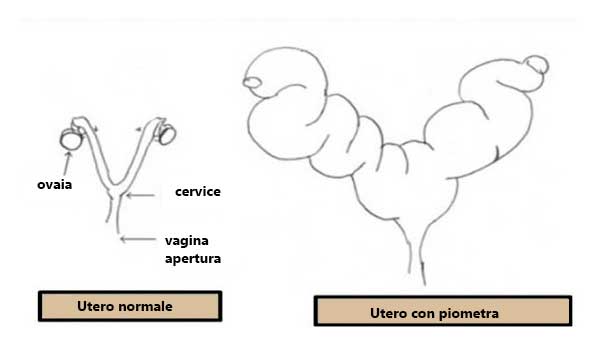 The number of times she had given birth (probably more than the 2 times the old owner had mentioned) could have precipitated the disease. In addition, we must remember that due to the special anatomy of English Bulldogs, most births must be done by cesarean, since having problems during natural births is very common.

The pyometras are considered an emergency as they can compromise the animal’s life, so Nessy had to be hospitalized the same day. She underwent an ovariohysterectomy, that is, removal of the ovaries and uterus. Nessy recovered perfectly and could return to enjoying her new family. 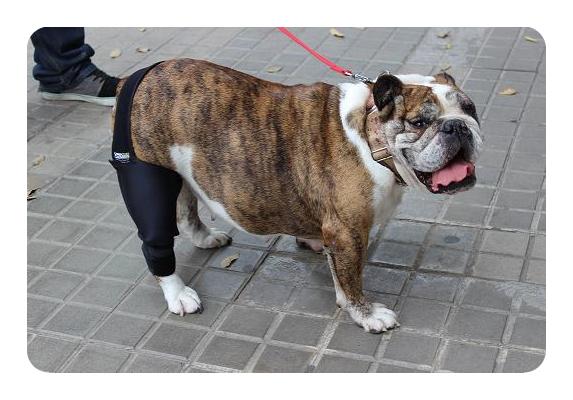 But after one year, Nessy had problems with her health again. This time she had a torn cranial cruciate ligament in her right knee. This caused her pain, a limp and osteoarthritis. To try to avoid these problems, they decided to operate on her. The surgery was a success, but after a few months she started to limp again. Now she needed an extra support for her knee, so her owners decided on a knee brace for dogs. This provided her with stability and reduced the pain thanks to the heat it maintains in the area.

Now Nessy is 7 years old and soon her other knee will be operated on as it has had the same problem, something that is very common. We are confident that everything will turn out okay because, as history tells us, Nessy can overcome this and much more.