This is one of the most commonly used devices in physical therapy. It uses sound waves with frequencies much higher than those audible to humans, the frequencies used as a therapeutic tool, 1 x 106, that is 1 Mega-Hertz (MHz), are not audible to any mammal.
Normally, veterinary clinics and hospitals use ultrasounds for sonographic scans with the same type of wave. The difference lies in the power, frequency and time of use.
In therapy we use frequencies of 1MHz for deep treatments up to 8 cm and frequencies of 3MHz for more superficial problems. The power ranges from 0.2 to 3 watts/square centimeter.

The main effect of ultrasound on tissues is anti-inflammatory. Usually it is used on tendons, joints or inflamed muscles, achieving excellent results for both acute and chronic injuries, although the power must be adjusted. 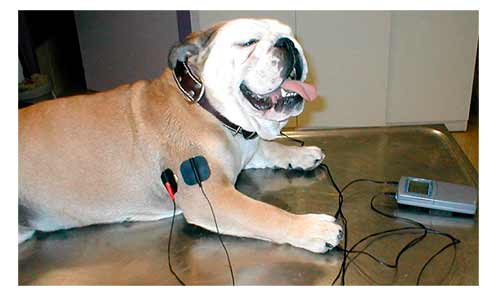 When there is fibrosis in the different soft tissues: muscles, tendons or ligaments, first we can apply continuous ultrasounds followed by pulsating ultrasounds at full power in order to achieve a good anti-fibrotic effect.

Another classic application of ultrasounds is on muscle spasms, with the ultrasound we can reduce and even eliminate them.

Ultrasounds are applied by moving the head during the course of the treatment, either in small circles or in a straight line in the direction of the tissues being treated. If done in any other way, especially if in any way besides the continuous manner, we can damage the tissues and cause significant burns.
A contact medium must be used, either contact gel or direct immersion (sub-aquatic ultrasounds). It is important to take into account the animal’s fur, the hair makes the transmission of the ultrasound difficult and it recommended that the dog is shaved before applying the ultrasound session). 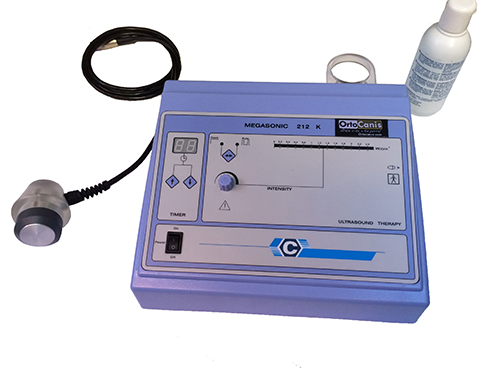 Approximate time between 5 and 15 minutes
Power between 0.2 and 3 Watts / cm2
There are different head measures according to different needs.

Ultrasounds can be used in any disease found in dogs that causes pain in the joints or soft tissue, such as tendinitis, bursitis, arthritis, contusions or significant hematomas ...

All surgical interventions cause inflammation in the tissues that have been operated on, ultrasound is a great tool for controlling the inflammation and other postsurgical problems such as a torn cranial cruciate ligament, patellar dislocation ...