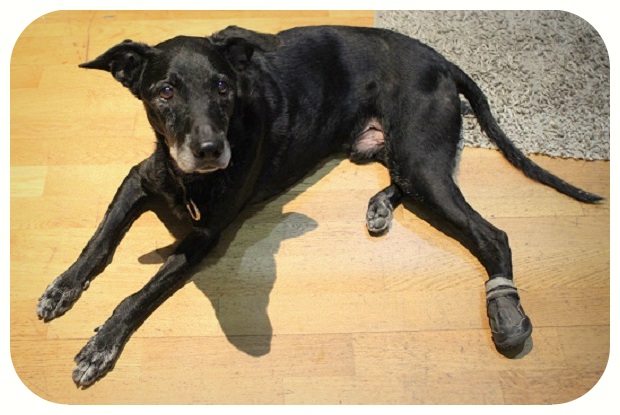 Tote was found a few years ago on the street. The family that picked him up was going to bring him to a shelter, but they took a liking to him and he ended up being taken home with them to live with their other animals (how many times does this happen…!) Tote is a dog with lots of energy, never sitting still. 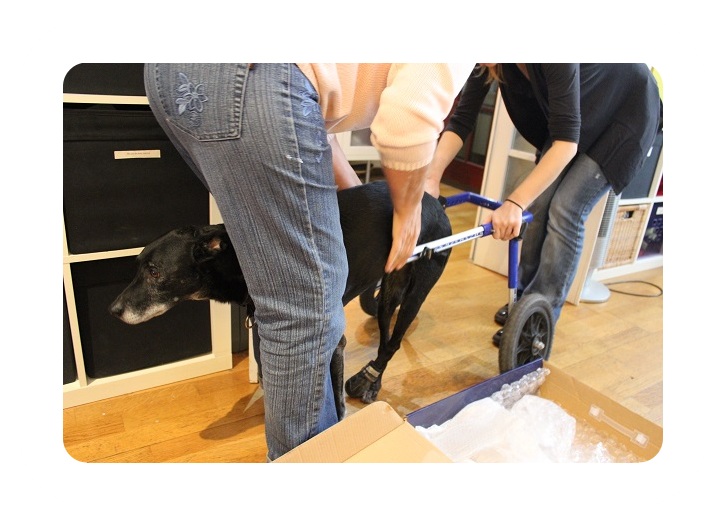 A year and a half ago a limp appeared in one of his hind legs. The vet determined that the origin of the limp wasn’t in the muscles, bones or joints, but in his nerves; the order his brain sent to move his legs never reached them. His illness, however, was not identified. The limp progressively got worse and it began to affect his other leg as well.

In this case, as so often happens in human and veterinary medicine, a diagnosis was reached by exclusion, that is, through various tests that discarded all other possible conditions. The diagnosis was the only one left, the one that can’t be “seen” in the tests: Degenerative Myelopathy.

Degenerative Myelopathy is a neurological disorder. It usually affects German Shepherds or their mixes, but it can also be seen in other breeds. It progressively kills nerve cells in the spinal cord. At the moment there is no curative or preventative treatment, so we opt to try and help the animal to live life as normal as possible by providing it with aids that assist in mobility.

A year and a half has passed since the first limp. Our hyperactive Tote has much more noticeable weakness in the hind legs, but he can still move. He still has strength in his front legs. In reality this is really good news, since as it is a degenerative disease, dogs usually lose these abilities rather quickly. And much of the “responsibility” of maintaining the quality of life lies with the owners: to prevent the loss of functions and muscle mass, they take him for a daily swim in the pool. In addition, 3 months ago they started using a rear support harness to help him support his weight while walking. But Tote is very active and keeping up with his pace can be complicated… for this reason they have opted for a wheelchair.

We received his visit in November of 2014. Keeping in mind that he is a very active dog and that for months he couldn’t move independently, his reaction to his first contact with the chair couldn’t have been any different… he didn’t even give us the time to adjust the supports for his hind legs, as soon as he noticed that he could move by himself, there was no stopping him ...

Wheelchairs give independence back to dogs and can help them in recovery and maintenance, since it enables the animal to walk and move its limbs without having to fully support all of its weight.

Tote, from all of us at Ortocanis, we wish you the best of luck and a long, happy active life.